10th Kingdom Wiki
Register
Don't have an account?
Sign In
Advertisement
in: Events, Article stubs, Crisis in the Nine Kingdoms

Crisis in the Nine Kingdoms

Edit
watch 01:36
We're Getting Mutants in the MCU - The Loop
Do you like this video?
Play Sound 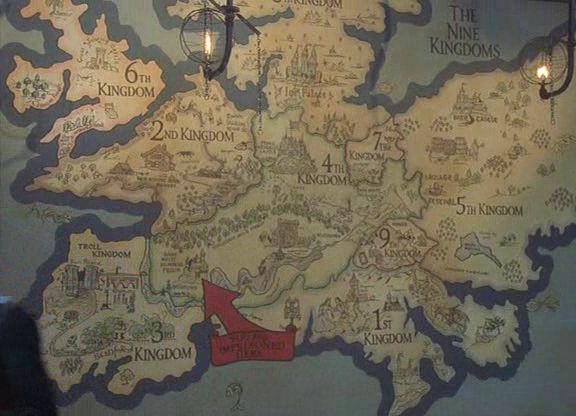 An event that shook the nine kingdoms, which also proved the existense of the Mythical 10th Kingdom!

After Snow White's Step-Mother, now known as the Swamp Witch, met her death as punishement for her wicked ways, she hand picked a troubled woman from another realm outside the Nine Kingdom to carry out her revenge. After teaching her the ways of poision the Swamp Witch's Protege murdered her way to become the most powerful woman in the Fourth Kingdom yet was stopped before she could Murder the young Prince Wendell. The Evil Queen, as she was dubbed, was placed into imprisonment for a thousand years and all seemed that they would live happily ever after.

What seemed to be a routine trip to the Snow White Memorial Prison complex to issue the refusal of his step-mother's barganing for parole, Prince Wendell White is shocked and horrified to find a blood bath of prison guards and his worst nightmare released by the Troll King Relish. Yet the Prince would face an even greater terrifying fate as the Evil Queen transforms the man into a dog.

With nothing else to do Prince flee's from the Evil Queen, only to be pursued by the bumbling yet dangeorous children of the Troll King and the queen's new Man Servant Wolf. Being chased into a corner the Prince manages to discover a most wondourous secret. A magic mirror that serves as a portal to a fantastic new world. The Tenth Kingdom.

While the Prince found himself in the mystical kingdom, he was introduced to Virginia Lewis, by means of colliding with the front end of her bike. Finding herself strangely drawn to the "handsome" dog, the Queen's minions caused ruckesses of their own. The Trolls were outwitted by Virginia, while Wolf made a deal with her father Tony and finding himself attracted to the pretty girl. With the mad capped chase through the kingdom Tony, Virginia and Prince returned to the Nine Kingdoms and the greatest adventure of their lives.

Strangers in a Strange Land[]

Finding themself back in the Snow White Memorial Prison complex, Prince, now able to comunicate with Tony due to a wish, explains the situation to the bewillered Father and Daughter. The strange dog is none other than "Prince Wendell White," of the House of White and that he is soon to be corrinated as King of the fourth kingdom. That is if he can ever get his body back from the Evil Queen. Tony and Virginia still amazed that lands of what they believed only to be stories actually exist must put their wonder on hold as Virigina is captured by the Trolls, and Tony and Prince are locked inside the Queens cell.

Wolf to the Rescue[]

The Passing of the Mirrors[]

The Dwarves of Dragon Mountain[]

Guidance from the Fairest of them All[]

After Tony and Virginia flee the vengeful dwarves for Tony's crime of murdering the mirrors his bad luck places him in an even bigger bind when he falls and nearly breaks all the bones his body. With her father unable to move and all three of them hoplessly lost in the caverns of the Dragon Mountain Virginia and Prince search through the darkness to find a way out, and come across something much more amazing. "For Seven Men She gave her life, For one Good Man She was his wife, Beneath the Ice near Snow Whtie Falls, here lies the fairest one of All." After discovering her grave Virginia Lewis comes face to face with the most Legandary Woman of the Nine Kingdoms.

Snow White has taken the role of Virginia's Fairy God Mother, telling her it was she who has been hiding her from the Evil Queen's Mirror's. Yet Virginia still has very little confidence in her self. Snow White however compares the young woman to the famouse tale of herself, reminding her that even though Snow White knew the dangers of letting in the old hag she knew she could never keep the door closed forever. The time would come when Viriginia would have to open the door and let the darkness in as well.

With her tale completed Snow White reminds Virginia that she is of great worth to many people, that someday she too will be a guide to little girls lost in the forest, but also cautions her that her protection will wear thin very soon and she must face the Queen soon, warning her that poison is how the Queen will strike and Virginia herself must use poison against the Queen. Giving her a mirror to guide Virigina, Snow White offers to grant her one wish, yet Virginia accidently wishes for two, for her father's bad luck to be over and for his back to be healed, however both are granted.

Snow White then feels that Tony is in grave danger and bids Virginia and Prince to his rescue. As Tony is confronted by the Huntsman, Virginia arrives in time to knock the evil Man unconcious and rescued her father. With her wishes granted Viriginia leads her father to the incredible sight of Snow White's Grave yet finds it has vanished.

After having found their way out of the Mine Shaft, the trio begin thier journey anew. The Magic Mirror that Snow White gave to Virginia reveals the fairest in the Land to Be the Queen, who a shocked Tony recognizes as his Wife, and Viriginia's long lost Mother, Christine Lewis. At the same time, as Snow White had warned Viriginia, the magical interference protecting the two of them has faded away and the Queen is able to sense that someone is spying on her.

Tony quickly tosses the mirror in hopes of protecting Viriginia from the mentally unstable woman's gaze. Finally the Father and Daughter must confront the night that changed everything. The night that a Manic Christine tried to drown a young Viriginia.

A horrofied Virginia, whose conflicting views of her mother, who used to tell her bedtime stories and tuck her in at night, and the woman, who simply abandoned her family, is forced to relive something she tried to block out and now has become a Tyrant that terroizes her new Friends, finally stops holding back and breaks down in tears about her struggle for the past decade with her dad, the fear of ever letting someone close again and the heartbreak of realizing her Mother left her.

The Lewis' in the Swamp[]

While the Queen prepares to carry out her plans, Virginia, Tony and Wolf get ready to crash the party. Yet the Queen is ready for them, and Virginia and Tony are betrayed by Wolf and thrown into the dungeoun.

As Prince witness the arival of the heads of states of the Nine Kingdom's including his Maternal Grandmother Queen Cinderella, Tony and Virginia are able to escape the dungeon they are detained by the Trolls.

Tony bravely fights the Trolls as Virginia races to stop the Queen from fullfilling her revenge. Yet she is stopped by the Huntsman and both Virginia and Prince witness the downfall of the Nine Kingdoms.

The time has come for Virginia and her Mother to face their prospective destinies. As the Queen decides to let the girl go, for reasons unknown to herself, Virginia demands an explanation for the years of abandoment that her mother caused. Yet the queen only adds to the young womans pain.

As the Queen orders the Huntsman to kill Virginia yet Wolf steps up and fights him. The Queen is left with no choice but to kill the girl herself. While the Queen tries to strangle her, Virginia grabs the poisioned comb from the Queens hair and in self defense scratches the Queen, accidently breaking the skin.

With little time to live Christine Lewis is cradled by her daughter. Knowing now who she really is and horrified by her actions, she is at least glad to be given the chance to assure Virginia that she always loved her.

Tony arrives in time to see his Daughter sobbing over the body of his Wife. All around them the guest awaken from their coma's, Wolf was able to switch the poision with Troll Dust. Finally Prince and the Decoy are able to return to their true form.

The Four Who Saved the Nine[]

King Wendell White bestows gifts upon each of his friends. For saving the Nine kingdoms Tony is declared an official hero

Almost Happily Ever After[]

Virginia is finally ready to return home, with Wolf beside her. Tony however has decided to remain in the Fourth Kingdom with Wendell, having promised to give the newly christened King an Industrial Revolution, starting with bouncy houses. He lays his daughters concerns to rest and promises he will return in good time, yet also reminds her that the warrant is probably still out for his arrest. Knowing they may not see each other again, or at least for a long time, Virginia and Tony finally part from one another, however both are stronger for it than when they came. After being seen off by Wendell, Virginia enters the enchanted mirror, with Wolf following, not before saying goodbye to the soon to be Granfather Lewis, leaving Tony in a state of shock.

After all of her adventures in the most incredible land, Virginia finds herself back where it all began, Central Park. Her life has changed, for the better. She now has a man who loves her, a stronger connection with her father and a new life growing within her. Finally the demons of her past have been laid to rest, and she know she and Wolf can live Happily Ever After...

At least they could have had it not been for another crisis in the kingdoms that disrupted it.

"But that's not this story, this story is done. And when you live every day with all your heart you can be Happily Ever After, even if it's for a short time. My name is Virginia Lewis, and I live on the edge of the forest...."

Community content is available under CC-BY-SA unless otherwise noted.
Advertisement